He Gives and Takes Away 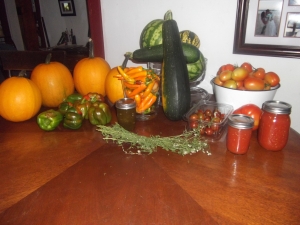 Harvest from one of our gardens

“Naked I came from my mother’s womb, and naked I will depart.  The LORD gave and the LORD has taken away; may the name of the LORD be praised.”  Job 1:21

This is a concept that has been very dear to my heart for many years.  There is a song that expresses this most fully and whenever I hear this song I end up so overwhelmed that I nearly choke up in tears.

While I know and realize that the Lord didn’t wish for me to lose my leg to cancer, or struggle in daily life since then, it is difficult to come to terms with the idea that the Lord allowed this to happen in my life.  While I do not charge God with wrongdoing (Job 1:22) I do seek His face and His purpose that no matter what has happened in my life I can bring praise to His name.

Before I lost my leg at the age of four one of my favorite things to do was run.  I can remember running as fast as I could for no other reason than I enjoyed it.  I remember the feeling of grass under my two feet and how one leg would follow the next up a flight of stairs so naturally.

Really, I was so blessed to have experienced those feelings because for the rest of my life I will ponder them in my heart as little gems.  There was such peace associated with being whole and being free to move with no tension or stress on the other parts of my body.  But the Lord gives, and the Lord takes away.  Blessed be the name of the Lord.

So often I think we forget that everything is the Lord’s.  We are only stewards of everything that is here, including ourselves.  Everything that we have is meant to bless us and bless others and is given by a loving Father in heaven.  But do we view our belongings and even our bodies as such?

Do we remember that even the hair on our head is a blessing?  That was something that I remember being very difficult to lose.  As a child I had blonde hair and everyone would rave about my dirty blonde curls and how beautiful I was because of my hair.  When I started chemotherapy it started to slowly fall out.  As the chemotherapy treatments continued bigger clumps would fall out and I would wake up in the morning to find balls of hair on my pillow to the point I would be petrified that I was dying.  Within a few weeks I was completely bald and no one commented anymore at how pretty I was.  No one complimented the way I looked anymore and as a little child I really missed that.  I knew my hair didn’t define me but at four years old it seemed pretty important as it was something that made me noticeable to others in a positive way rather than the negative stares I started receiving as a bald child.  But the Lord gives, and the Lord takes away.  Blessed be the he name if The Lord.

I remember the children that were around me in the hospital alone.  Their families had checked out mentally and physically.  Most parents didn’t have the mental capacity to handle the suffering and death that accompanied cancer.  They would drop their small children and teenagers off at the hospital door and leave them alone for weeks and sometimes months at a time.  The children and teenagers would cry out for their families and you would hear them at night.  There were plenty of toys, plenty of gifts, plenty of THINGS surrounding us at the hospital but in the moments of pain and even facing death these kids cried out for family. They needed love and fellowship to push them through what they were facing and to give them strength to fight on.  Do we realize that our families, however imperfect they may be, are a gift from God?  The Lord gives, and the Lord takes away.  Blessed be the the name of The Lord.

Several years ago I taught a bible study at a local church and I used to pick up a lady that was very poor and not well off mentally, physically, or financially.  She would come each week that I picked her up for my study and she would participate and smile for the class duration.  She had a big toothless smile and would always say “I am so blessed”.  One day during church I happened to glance over and watch her put her change purse into the offering.  She was aglow as she did this and it made me realize the beauty in the sacrifice she was making for Jesus.  She knew and understood that every last thing in her possession was the Lord’s.

“And He sat down opposite the treasury and saw how the crowd was casting money into the treasury. Many rich people were throwing in large sums.  And a widow who was poverty-stricken came and put in two copper mites [the smallest of coins], which together make half of a cent.  And He called His disciples and said to them, Truly and surely I tell you, this widow, [she who is] poverty-stricken, has put in more than all those contributing to the treasury.  For they all threw in out of their abundance; but she, out of her deep poverty, has put in everything that she had—[even] all she had on which to live.”  Mark 12:41-44

The beauty of this struck deep and humbled me because just as the song says “when there is pain in the offering, blessed be the name of The Lord.

At night when we lay our heads down to sleep do we grasp the gift that we receive in having a safe place to sleep?  Two years ago we went to sleep in our apartment that we lived in after being married. Several hours later the dog woke me and I realized our apartment was full of smoke and there was a fire.  The smoke damage was so extreme that we were later told within another ten to fifteen more minutes of being asleep we would have died from suffocation without even waking up.  The Lord used the dog to wake us and alert us to the danger. I believe He gave us this gift so that we could bear testimony of Him.

While we lost some things and a comfortable place to sleep for awhile we were safe and the Lord used this as a transition period in our life; The Lord gives and the Lord takes away.  Blessed be the name of the Lord.

Traveling back from Dominican Republic on vacation I had been complaining about my prosthetic leg.  It had been uncomfortable and rubbing, causing much irritation.  Our flight home was delayed by 10 hours which meant I had to wear prosthetic leg for nearly 24 hours since we were forced to check out of the hotel and I couldn’t carry it along with my luggage.  I was so uncomfortable and doing my fair share of whining.  Then, as we pulled out of the hotel on the bus for the airport I looked down and there was a young girl on the street with no legs.  She was on her nubs in the street rummaging through the trash for food.  She had no prosthetic device, no food, and still she held her smile as she was fighting to survive in the only way she had the ability to.  I was so humbled and ashamed in this moment to realize the extent I had been blessed!  To even have the opportunity to own a prosthetic leg and be mobile without hunger was a blessing from God beyond measure.  I believe with all my heart if I had stopped to talk to that girl with a smile on her face she would have told me, “the Lord gives and the Lord takes away.  Blessed be His name!”

These are all examples of simple things that we tend to take for granted in our lives.  We all have so much to be thankful for.  When bad things happen to good people we need to change our attitudes and seek a heavenly mindset.  Bearing foremost that every thing we see is temporary and that our real treasures are being stored in heaven.

“But store up for yourselves treasures in heaven, where moths and vermin do not destroy, and where thieves do not break in and steal.” Matthew 6:20

After this life we will know no more pain or suffering.  This is the only time that we have (our time on earth) to show God that we love Him and believe that He also mourns with us because of the bad that has befallen us. Our forefathers have allowed evil to enter the earth through sin. When Jesus walked the earth He wept over many things.  Our God emphasizes with us in every struggle! In our pain when we turn and say to Him, “Blessed be YOUR name, LORD” we are saying:

“Lord, YOU are holy, good, caring, and full of blessing!  You understand what we are going through and grieve with us, yet you respect the authority you gave to us when you created the earth and the fact that through Adam and Eve we allowed sin into the world which results in pain and suffering to this day.  We don’t understand all of these things and why they are happening to us, but since mankind allowed sin into the world these consequences will be present.  Until Jesus returns and there is a new heaven and a new earth there will be pain and suffering here.  We praise You because only You have the power to redeem these things and make them right.  We praise You because of who You are and because there will be no other time for us to recognize Your holiness like we can right now in our pain and suffering. Blessed be the name of the Lord”

What do you have?  What has been taken away?  Today, how will you bless the name of the Lord?

4 thoughts on “He Gives and Takes Away”