A New Leg of My Journey 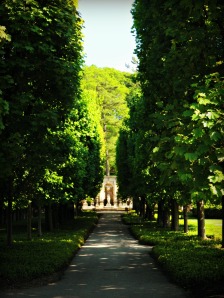 Twenty five years ago chemotherapy looked so very different than it does now. This was before nausea medicine, before steroid injections, before platelet shots.  Back then most blood transfusions were not scanned for HIV and most drugs were experimental. Treatment with chemo often took a patient to the brink of death and then stopping to see if they bounced back, a real “no pain no gain” era. It truly was the blood and gore battlefield that gave cancer treatment such a horrible name. In my experience more children died from the experimental drugs and chemotherapy treatments than from the cancer it seemed. (And every one of us that made it through owes our lives to the very same treatments God had his hand upon!)

“For I know the plans I have for you, declares the Lord, plans for welfare and not for evil, to give you a future and a hope.” Jeremiah 29:11

Recently walking through the local cancer treatment center with someone very dear to me battling breast cancer I was so shocked with how far medical science has come since those days. It seems they foresee every single side effect now and have a sort of treatment plan to keep you functioning at nearly 85% throughout the treatment. A statistic that was unheard of back in my day!

As I walked along with a nurse during the tour she asked about my leg being amputated and if treatment seems to have changed much in twenty five years. I smiled and said, “Oh yes, I always thought I would never have it in me to fight cancer twice but after seeing this today I am sure that if God would lead me to it then He would lead me through it. Back then there wasn’t even any nausea medicine if you can imagine what that was like or what it did to our stomachs, mouths, and OH the sores!” The nurse shook her head in disbelief as I found words for what I truly was feeling inside of my heart.

“It feels,” I continued, “Like somehow all of the experimental things I was apart of twenty five years ago and all of the studies I have partaken in since have been worth it. It feels as if I am somehow a part of getting us to this point here today where patients don’t have to nearly die before being able to live again. It feels so right to see things come full circle like this.”

“But Jesus looked at them and said, “With man this is impossible, but with God all things are possible.” Matthew 19:26

As we exited the building I realized every detail right down to greeters has changed. The greeters met us at the door with golf carts to take us back to our vehicle. Smiling, asking how my appointment was (I didn’t have the heart to tell them the appointment wasn’t even for me) I knew that to many people entering and exiting the treatment center that just one smile and question may be the very thing to give them strength for the rest of their day.

“Again Jesus spoke to them, saying, “I am the light of the world. Whoever follows me will not walk in darkness, but will have the light of life.” John 8:12 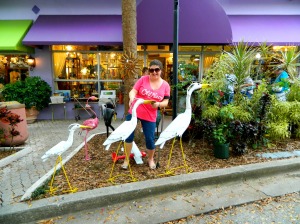 Today, twenty five years later living with the aftermath of cancer and amputation my life looks a lot different. For all of my sharing about my struggles with the prosthesis I have begun a new journey to look for answers. Realizing that only 4% of amputees are amputated as high up as I am has been something that I have always accepted and in a way simply allowed to drown me in helplessness.

Then about six weeks ago I went for a truckload of mulch and came home, dipped my shovel into it a mere two times before I heard the SNAP (and no “crackle” or “pop” to follow) which meant that I was not listening to a Kellog’s commercial but rather my leg had broken once again. Feeling defeated and completely helpless since my husband was at work and I was alone with a forecast of pending rain and a truckload of mulch I broke out the duct tape to make finishing the bare minimum of my task possible. As my Chihuahuas watched their “crazy mama” taped up her leg and started digging back into the mulch. I was full of anger and shedding tears of despair as a new plan was brewing under the surface.

“Therefore encourage one another and build one another up, just as you are doing.” 1 Thessalonians 5:11

I decided that if this is happening to me and it isn’t happening to anyone else there is something wrong with that. If others are not wearing their hip disarticulate prosthesis to do any high-functioning tasks (like mulching, canning, painting on ladders, walking miles, digging, or jumping out of truck beds) then there is something wrong with that picture! I decided that if the leg I currently have is the absolute best that is to be offered to me at my high level of activity for my amputation type then there is something wrong with that picture as well! Maybe if the legs were more functional, comfortable, and high performing the 4% of amputees would be wearing their legs more! Perhaps the problem isn’t that there is “no demand” as I have been told but rather that the demand is a silent and seeming defeated one.

Since then this writer/wife/amputee/gardener/speaker has morphed into a pioneer. I have started a journey to find not only what is already invented out there to but couple with doctors and inventors willing to take on my situation and think out of the box to create something that hasn’t been created yet. If there is a silent demand then I will give a voice to that and bring it to life in hopes that the other 4% will begin to come out of their holes and begin to dream a little more big than “I must deal with it because there is no other way”. After all, is it really unreasonable for me to dream of walking down the beach with my husband in Port Canaveral, FL without my leg breaking and my needing to seek out a park ranger for a screwdriver? Talk about killing the romance!

So after nearly twenty emails to different places and phone calls here and there I started the journey today with the first group to take me up on my quest. I had a three hour evaluation which left me depleted emotionally, physically, and even mentally. As the team was blown away test after test at my ability and physical fitness for my type of amputation I felt a sense of accomplishment and peace within my heart. Here I am once again paving the way for future amputees and survivors to walk. It may not be an easy road for me now but someday when I walk through a center that specializes in the very thing I am overcoming I will smile back and know that God used me in this very small way to make a difference for the second time in my life.

“Iron sharpens iron, and one man sharpens another.” Proverbs 27:17

Sometimes rather than see the struggle and see the pain that is in the “here and now” we must force ourselves to look out at the horizon and embrace that we can either be the stone that rejects the builder or allow ourselves to be used in the foundation of something much bigger than ourselves. For me, rather than suffering through and waiting for someone else to step up to the plate, I am choosing to say, “Here I am Lord!”

3 thoughts on “A New Leg of My Journey”